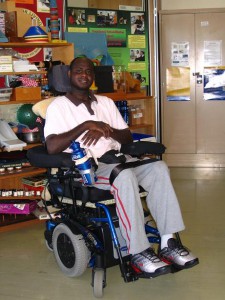 My name is Lamin Bangura. I am originally from Sierra Leone . Freetown, the capital city of Sierra Leone, was where I was born and grew up. Sierra Leone is at the west coast side of Africa. I come from a family of seven. My father was the Inspector General of the Police and he was murdered by Camajors Civil Political Fighters when I was a kid. My family and I ran to the neighbouring country which is the republic of Guinea Conakry because we were not safe. The Republic of Guinea is a French speaking country which we found difficult to live in.

My family and I left Guinea Conakry in 2003 to come to Australia. I had been in Australia almost five years when I had my spinal cord injury. On the 6 th of March, 2007 a friend of mine and I were about to go to work but I forgot my car key and apartment key and if I was going to grab public transport I knew I was really going to be late so I decided to climb up to the balcony to go in my apartment and grab my keys. By then I was living on the first floor. I climbed and stood on the ground floor cement railing and I reached my right hand on the top of my railing on the first floor and my hand slipped and I fell down about 6 feet onto my right hand. A friend of mine called the ambulance and a guy who was passing with his car stopped and gave me a hand and first aid help. I was conscious but in shock and the ambulance came and took me to St George Hospital in Kogarah. An X-ray was taken there and they found out that I’d injured my spine and broken my neck. I was flown by helicopter to Royal North Shore Hospital.

On the 9 th of March I had an operation to repair the damage. After the operation I was helpless and very sick and could not move my legs and hands and was not able to speak. My recovery was slow because of the major injury that I had and I was at RNS for 8 weeks and was eventually discharged to Royal Ryde Rehab. My journey in rehab is slow but interesting with lots of challenges every second, minute and hour, day and night. The good thing about rehab is it is a process to prepare you for going home by teaching you much about how to be independent so you can live in the community and at home. The thing that helped me to face my challenges at rehab everyday is my strong inner faith as a Christian that believes in Christ and gives me a persevering attitude to go through what ever bad time I need to go through. What I have learnt about rehab is that you have to work very hard to get as much independence before you go home. Also, doing some individual physio and OT helps you with your physical fitness. The reality about spinal injury is actually it’s a new beginning to life that makes you see the world from another point of view. It is not an easy journey but it is worth being persevering because there is still a better life for you in the future that can even make you stronger than ever before. There is one thing that I have learnt about life in the past and the present moment and that is that everything that happens to anybody, either good or bad, you should not be surprised because in all aspects of life there is risk and the main thing about my story is no matter what you do or which way you look at life there is always risk. So the only thing you can do is to persevere and be strong on the inside and out.