Having recently purchased a 9.7 inch iPad Pro (which is the smaller of the two iPad Pro’s) on a plan with my phone carrier, I have been busy putting it through it’s paces. The justification for the word ‘Pro’ lies in it’s excellent A9X chip, 12 megapixel camera, enhanced speakers and Touch ID finger print scanning (which adds heaps of convenience when used instead of a password). The iPad Pro is also the first iPad that has allowed me to use all of the multitasking options available on the iPad. I’m loving the split screen mode (where I can also watch a movie!). 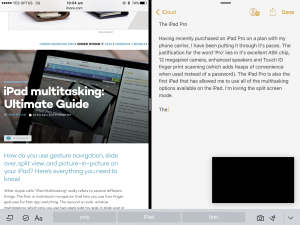 The added menu that pops up on the screen when you have the Apple keyboard attached is also really handy, with easy access to word predication, formatting buttons, camera and drawing functions.

Speaking of drawing, the Apple Pencil (which, like the keyboard is an added cost) is a beautiful stylus, drawing implement (which, if I’m honest, my artistic talent is not doing anything close to justice!)

Without doubt the iPad Pro is the best tablet that I’ve ever used. That said, it’s not cheap, and what you plan to use it for will dictate if the ‘Pro’ features are worth the money.