If anyone ever asked me if a split-second could change your life forever a year ago I would have said no way. I would have replied with some naive comment – something along the lines that it takes more than one moment to change your life. I have found this untrue, especially when you find yourself suffering a spinal cord injury due to one moment of madness.

On seventh of October 2004 I started the day as somewhat of a naive 22-year-old who thought he was invincible, who didn’t worry a lot about others but only for himself and whose primary concern was to continue playing first grade football and to quickly finish University so as I could get out and make my first million. I wasn’t really worried about whom I might tread on or who I might upset along the way. I ended that day as a 22-year-old who was very lucky to be alive and whose only concern was whether or not I would ever see the light of day again. After diving into a shallow pool at university I ended up a C-4 quadriplegic. 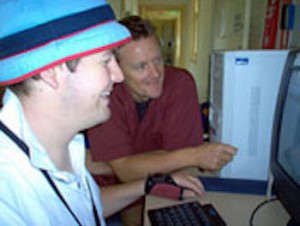 The accident was such a life-changing incident that I had to learn to overcome many obstacles. One of the ways of overcoming these obstacles has been by attending computer classes, working with the teachers and using adaptive technology provided on the SpinalWorks project. This has allowed me to realize that a spinal cord injury is not the end of life but the start of a new chapter.

I want to continue with university and have 18 months to go until I graduate with a Commerce/Law degree. My experiences have taught me that my goals in life are still achievable.